I AM A BOND SERVANT OF GOD-angel of destiny

We should always serve the Lord
And Him alone, we should fear.
For the throne of our hearts,
He does not want to share.
We should never allow another,
The place reserved for Him,
But to give Him that place of Lordship
That will keep our hearts from sin.
For we must choose whom we serve
And whom our allegiance is for.
But as for me and my household,

We shall only serve the Lord 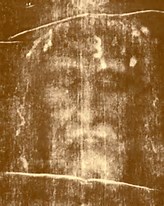 This was the negative and positive picture depicted from Shroud of Turin-a piece of cloth to cover death. The face of the dead human body of Jesus was marked on the shroud. This was where the image of Jesus came originally was said by historian and artist. Some claimed that it was a fake, while others said it’s the real shroud and face of Jesus after they checked the DNA and signs of brutality on his face which was also marked.

This picture shows the marred face of Jesus.

In Isaiah 52:13— his appearance was so disfigured beyond that of any human being and his form marred beyond human likeness—

According to historian the Jews during the times of Jesus wore short hair. It was a blasphemy against God if a Hebrew wore long  hair. Even in Roman, History shows picture of short hair famous men like Herod, Alexander the Great, Titus, King Cyrus, etc.

Therefore, Jesus Christ does not have a long hair. It’s in fact a defiance of God for men who wears long hair. Look at the Satanist, Antoine La Vey, Marilyn Manson and rock singers. They have long hair. Whatever these people do will always be in contrary to the Bible’s description.

In Isaiah 53:2 2 He grew up before him like a tender shoot, and like a root out of dry ground. He had no beauty or majesty to attract us to him, nothing in his appearance that we should desire him.

Look at this picture of root on dry ground. In other words, He is not what we think like the images portrayed. He was ordinary-looking. Isaiah was prophesying that the coming suffering Servant would arise in lowly conditions and wear none of the usual emblems of royalty, making His true identity visible only to the discerning eye of faith.

John 7:24 Stop judging by mere appearances, but instead judge correctly.”

This was what Jesus said when He was teaching at the Temple on Festival day and some crowd (Sadducees and Pharisees) were going against Him. That statement of Jesus implies of His looks-he has no beauty to attract, just like the roots on dry ground. Therefore, the pictures of Jesus portrayed in images worship by many is far from Jesus real face.

Remember the 2nd Commandment of God 7’You shall have no other gods before Me. 8You shall not make for yourself an idol, or any likeness of what is in heaven above or on the earth beneath or in the water under the earth. 9You shall not worship them or serve them; for I, the LORD your God, am a jealous God, visiting the iniquity of the fathers on the children, and on the third and the fourth generations of those who hate Me,…

Therefore, worshipping and bowing knee to idols is practice by the Pagans and is of Satan. Worshipping God is of Spirit and Truth that does not require any images at all.

FORGIVE US OUR SINS AS WE FORGIVE THOSE WHO SINNED AGAINST US. That’s how Jesus taught us in our prayer. How can we be forgiven, if we do not know how to give forgiveness to others.

I know how these victims of human violations of the Martial Law felt.  Wallowing in the past would make them chained to it and will not be able to move on with peace and joy. God said, “Vengeance is Mine”.Haven’t the Marcoses felt  the most humiliating and embarrasing  eviction from the Malacañang Palace which was a news worldwide?

I remember the Martial Law under Marcos regime. He made people believed of a drama (bombing of Plaza Miranda is one)in the politics and declared the Martial law.  People said he won the second time because of fraud and there was alleged used of government funds to support his candidacy. From then on he ruled the country under martial law for almost 10 years. Even he lifted up martial law he still  retained some of his powers.

I recalled student activists marching in different areas of Metro Manila with  band on their head  or on their wrist. Most of the time if the marchers was along their  way to school, there will be no classes. They would gathered and marched near university belt, open places where there were many people  like the Avenida Rizal, Mendiola, Liwasang Bonifacio and the Commonwealth or the Circle in Quezon City.  I recalled one time while the jeepney I was on  passed by the Liwasang Bonifacio(my school was at Lyceum Manila), there were firetrucks throwing tear gas on the rallyists. I also experienced having witnessed the student activists rallied along Avenida Rizal and they were shouting and making noise barrage. It was indeed true that these student activists or rallyists were joined and spearheaded by KMU-Kilusang Mayo Uno and other leftist group.

That’s how chaotic and horrifying  Manila was. There were news blackout and you can only watched and heard good news of the government programs. People voices were mummed. You’re only response was to follow the law of the Martial law regime. Death of government antagonists were not featured in newspaper or in television, or radio. You will hear news about famous people, students  detained for  subversion which you will learned through hearsay. There were news of torture and mass killing . It was so appalling, if that was the right term.

I hope and pray that these people can move forward with their life without bitterness by forgiveness. Breaking the chains of the past will make a joyful peaceful life , have they only realized.